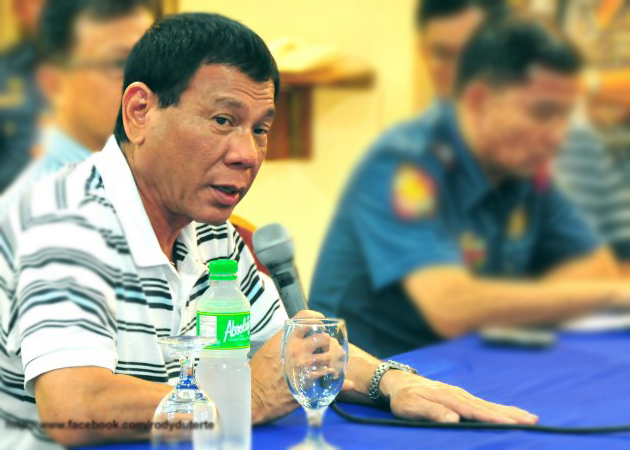 Rodrigo Roa Duterte is a Filipino politician and the current Mayor of Davao City in the Philippines.

Duterte was born on March 28, 1945 at Maasin, Leyte to Vicente G. Duterte, who served as Governor of Davao and Soledad Roa, a school teacher and a civic leader.
He spent his elementary days at the Sta. Ana Elementary School in Davao City, where he graduated in 1956. He finished his secondary education at the Holy Cross of Digos. For his tertiary education, he took up a Bachelor of Arts degree at the Lyceum of the Philippines University, where he graduated in 1968. He also obtained law degree from San Beda College in 1972. In the same year, he passed the bar exam.

After the 1986 People Power Revolution, Duterte was appointed officer-in-charge vice mayor. In 1988, he ran for mayor and won, serving until 1998. He set a precedent by designating deputy mayors that represented the Lumad and Moro in the city government, which was later copied in other parts of the country. In 1998, because he was term-limited to run again for mayor, he ran for the House of Representatives and won as Congressman of the 1st District of Davao City. In 2001, he ran again for mayor in Davao and was again elected for his fourth term. He was reelected in 2004 and in 2007. In 2010, he was elected vice mayor, succeeding his daughter, Sara Duterte-Carpio, who was elected as mayor.
Under Duterte’s leadership, Davao City has maintained its peace and stability. The city’s crime rate dropped dramatically that local tourism organizations dub it as “one of the most peaceful cities in Southeast Asia.”

• Amended Liquor Ban As pushed by the Mayor, the City Council amended the ordinance no. 1627, Series of 1994, which now prohibits, selling, serving, drinking and consumption of liquors and alcoholic beverages from 1:00am until 8:00am.

• Speed Limits for all Vehicles Mayor Rodrigo Duterte signed Executive Order no. 39 setting the speed limits for all kinds of motor vehicles within the territorial jurisdiction of Davao City in the interest of public safety and order.

• Aid for Visayas Davao City sent rescue and medical teams to Tacloban City to give aid to the victims of Typhoon Yolanda. Financial assistance was also given to Bohol and Cebu for the earthquake victims.

• Emergency Response The City Government of Davao acquired 10 more ambulances for central 911 intended for medical emergencies and 42 new mobile patrol vehicles and motorcycles for the Davao City and Police Office.

• Security Mayor Rodrigo Duterte, through E.O no. 24, ordered all shopping malls and commercial centers to install, operate and maintain high end and high definition closed circuit television (CCTV) cameras in all entrance and exit points of their premises.