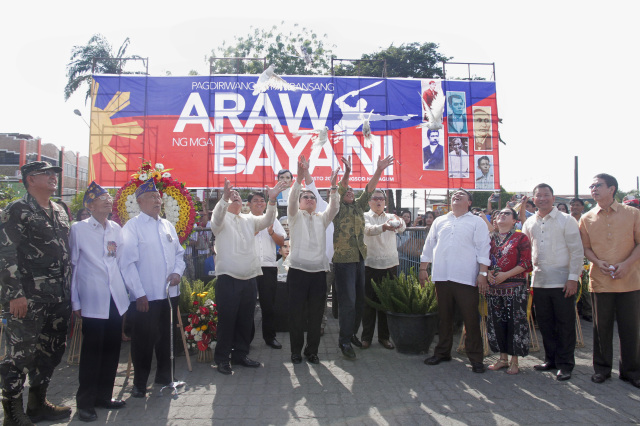 City Officials, led by Mayor Allan L. Rellon, led in the releasing of white doves as a symbol of the city’s tribute to the sacrifice of the country’s heroes during its observance of the National Heroes Day last August 25, 2014. Photo by Leo Timogan of CIO Tagum

TAGUM CITY—Tagumenyos were asked to reflect on the value of modern-day heroism as the city joined the whole country in paying tribute to the nation’s revered heroes in time for the celebration of the National Heroes Day last August 25, 2014.

Mayor Allan L. Rellon led the city in paying homage to heroes of yesteryears and to those unsung heroes who have fought hard for the country’s independence.

Their sacrifice, as well as their tenacity, according to the local chief executive, should serve as an inspiration for everyone especially in the modern times.

“It’s not necessary that you sacrifice your life to be a hero, but living your life for the service to others can also be a measure of heroism,” said Mayor Rellon in his talk to the local media after the program.

The city’s observance of the National Heroes Day was marked with a wreath-laying ceremony at the Freedom Park that was participated by City Officials, department heads, members of the Veterans Federation of the Philippines, Sons and Daughters of Veterans, the Philippine National Police, Philippine Army, Bureau of Fire Protection and the Bureau of Jail Management and Penology.

A short program then followed the ceremony, where series of patriotic songs and dances were performed by the students of selected schools in the city.

Seven white doves were later released towards the end of the program, signifying the city’s tribute to the sacrifice of the country’s heroes. | Louie Lapat of CIO Tagum