When we throw away these devices, we generate e-waste, which results in the release of tons of toxic metals such as lead, mercury, cadmium, and beryllium to be released into the air and seep into the ground and waterways. 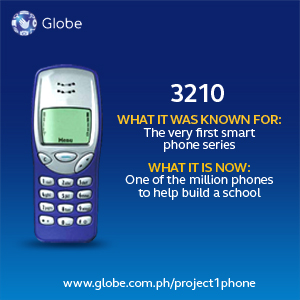 How do we solve the e-waste dilemma? By putting one old phone to good use instead of throwing it out.

Globe leads the country’s biggest and most ambitious mobile recycling program—Project 1 Phone. By donating just one unused, non-working or damaged phone, tablet, phone battery, or even an old personal computer to Project 1 Phone, each Filipino can do his share in minimizing the environmental impact of e-waste and countering its harmful effects.

Here’s a video that explains the harmful effects of e-waste and how we can combat them by donating old phones to Globe’s campaign: https://www.youtube.com/watch?v=GCMJ2rRWGPs

This could help raise awareness of the effects of e-waste and help us rally for donations. You may have old phones that you want to donate to the cause that will help build schools in Aklan.