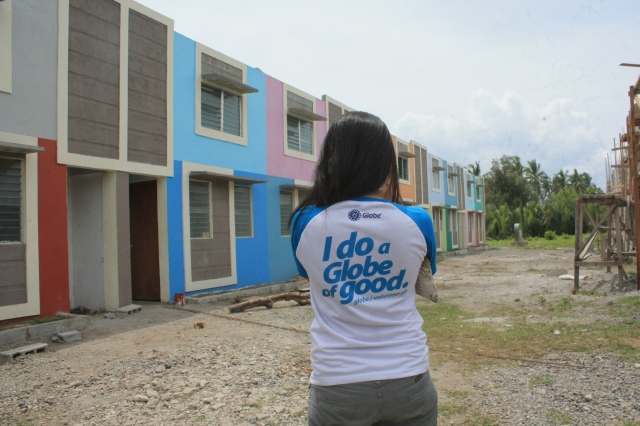 A year ago, tragedy struck the country as Supertyphoon Haiyan brought devastation to lives and properties in the Visayas region. Since then, public and private sectors—even from the international community—have joined hands to bring the typhoon-struck areas back on their feet, and Globe Telecom was among the first companies to respond.

Globe, together with Gawad Kalinga, has completed a total of 162 homes in Brgy. Tambulilid, Ormoc, Leyte and Brgy. Fatima, New Washiongton, Aklan, as well as in Brgy. Tugas, Madridejos, Bantayan Island, Cebu via sponsorship of SingTel. 28 more houses are lined up for construction in Libacao, Aklan.

Additionally, Globe is also set to give out 600 shelter kits to Libacao before yearend aside from the 940 shelter kits already distributed in Madalag, Aklan.

Globe also became a Development Sponsor for Aklan under the Office of the Presidential Assistant for Rehabilitation and Recovery (OPARR) where it spearheads initiatives in housing, education, livelihood, and health to help seven of the hardest hit municipalities: Libacao, Madalag, Banga, Batan, Altavas, Balete, and New Washington.

Globe not only provides houses for Aklan but is also working on building schools for its seven areas of concentration. With the help of Habitat for Humanity and Ayala Foundation, the company is building in two phases. The first phase involves the construction of “Noah’s Ark”-type classrooms that double as evacuation structures during calamities as they are equipped with three toilet and bath facilities each as well as a kitchen. The second phase is comprised of more than 30 regular but “built back better” classrooms to be funded from proceeds of the company’s enterprise-wide waste management program, as well as from parent-company Ayala Corporation.

To top it off, Globe launched Project 1 Phone to educate Filipinos on the importance of proper disposal of electronic waster or e-waste and to contribute to the building of classrooms in Aklan. Under this project, everyone can support the efforts in Aklan by donating their old, non-working mobile phones for recycling at participating Globe Stores. Proceeds of the program will be used as additional funding for the schools. Cash donations of 5, 20, 50, 100, 500 denominations may also be sent directly to Habitat for Humanity by texting DONATE HABITAT <amount> and send to 4438.