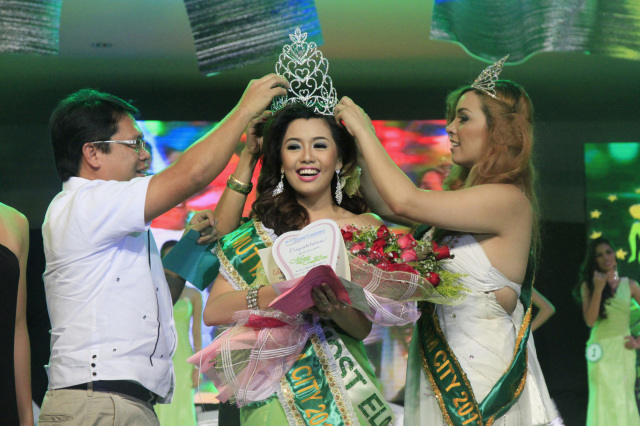 TAGUM CITY—Loud cheers and jubilation marked the coronation of Barangay Mankilam’s Korina Dayan Sawan as the newest Mutya ng Tagum City which signaled the start of her year-long reign as the city’s ambassadress of goodwill.

A jam-packed RDR gymnasium stood witness to the historic crowning last November 20, 2014, exactly a year ago after the first Mutya ng Tagum was crowned.

Aside from winning the night’s top plum, 20 year-old Korina hauled minor and major awards—including Miss Eloquent—besting nine other candidates in the competition that is marked with pomp and splendor, beauty and intelligence.

“It was really unexpected because I was not the smartest, prettiest and sexiest among the 10 candidates,” she posted on her Facebook account which have 3, 230 followers as of this writing.

Korina will spend her one-year reign as Tagum’s ambassadress of goodwill, specifically on the local government’s agenda of wellness, sports and health that are stipulated under the EAGLE WINGS Program, which is the central theme of this year’s pageant.

“I have been waiting for this moment and I can’t believe that I made it. I will not promise anything but I will do my best to fulfill my responsibilities as a Mutya,” she added.

Adjudged as 1st runner up  was Janine Nicole Orcena of San Miguel while Krizia Kazandra Prado of Magugpo North took home the 2ndRunner up prize.

The City Government of Tagum partnered with Buenas Supermart in staging the 2nd search for the city’s official muse, which is one of the activities in celebration of the Parochial Fiesta of Christ the King.

Among the members of the panel of judges who helped in selecting this year’s Mutya ng Tagum are Binibining Pilipinas MJ Lastimosa and Actor Host Mikael Daez. Louie Lapat of CIO Tagum