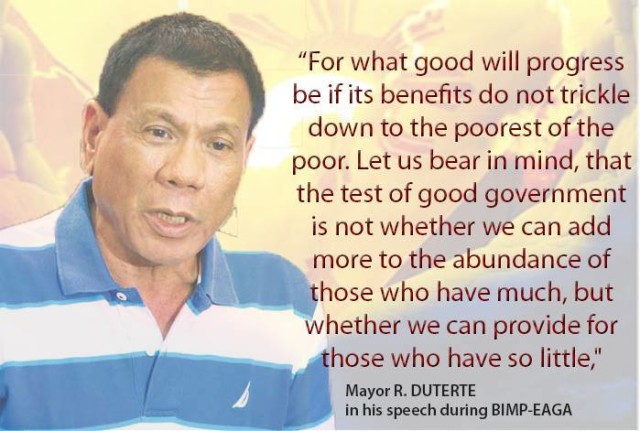 The people’s prayers have been answered and this could be the best Christmas present to Filipinos who are fed up with corruption, criminality, injustice and endless conflict in the country.

Davao City Mayor Rody Duterte, who had earlier categorically and vehemently rejected proposals for him to consider the Presidency, has given the first hint that he may yet agree to run for the country’s highest political position.

Shortly before Christmas, Duterte gave a statement which I interpreted as the first official confirmation that he is yielding to the nationwide clamor for him to run for President.

(Please tell them, pare, to go and look for other candidates. If they really could not find anybody, they could come back to me.)

In spite of this statement, I still had my misgivings on whether he was serious or not because not even Duterte’s closest friends, except perhaps Go, knew what was in the city mayor’s mind.

It was only after he clearly stated that if he would become President he would end the conflict in the country by talking to the National Democratic Front and the different Moro rebel groups to strike a peace deal when I decided to write about the hint he gave on agreeing to run for President.

In his weekly TV program “Gikan sa Masa, Para sa Masa” which is pre-recorded and aired every Sunday on ABS-CBN Southern Mindanao, Duterte said “arrogance” on both sides has prevented the resolution of the 46-year communist insurgency in the Philippines.

““I am open to a coalition with revolutionary forces and other patriotic forces,” said Duterte. Until recently, the mayor was vocal in rejecting efforts to make him run in 2016.

“I guarantee that it will not be a communist government as it will retain the basic fundamentals of a democratic society,” he added.

“The National Democratic Front had brought up the proposal for a coalition government in August 2005.

“But both the past and the present administrations had rejected the idea.

“Duterte said should he agree to a coalition government as president, he would retain the control of the Philippine National Police and the Armed Forces of the Philippines (AFP), eliminate paramilitary groups and start the government “with a clean slate,” by implementing genuine land reform and national industrialization. The insurgency, he said, has been going on for the last 46 years and arrogance would never solve it.”

The Communist and Moro problem is just one of the issues which I believe softened Duterte’s hardline position against considering the Presidency.

On Nov. 23 during a late night coffee with his childhood friend, former agriculture secretary Carlos “Sonny” Dominguez in the Gateway Marco Polo in Hong Kong, I confronted Duterte with the question: “If you will not consider the Presidency, who do you suggest should I support for the Presidency?”

Vice President Jejomar Binay, even if he denies the accusation and charges of corruption against him, will not be able to carry-on the anti-corruption campaign of President Aquino while DILG Secretary Mar Roxas simply does not have the “connect” with people to be an effective President, I told Mayor Duterte.

Grace Poe, on the other hand, who is surging in the popularity surveys is still “wet behind the ears” in the dog-eats-dog Philippine politics and she could just be manipulated by interest groups and the big political players, I said.

He was not able to answer my question and that was when he agreed to listen.

Exactly a month later, as the calls for him to consider the Presidency because of the worsening problems of corruption and criminality in the country have snowballed and gathered steam, Mayor Duterte gave the first hint that he is willing to yield.

That night in the Marco Polo hotel in Davao City, when Duterte pointed his finger to the imagined political field outside of the hotel where Filipinos should “look for other candidates,” I knew that the finger would curl back and point to him.

Now, the Philippines faces the bright prospect of having a President in the mold of Singapore’s Lee Kuan Yew, a President who possesses a wealth of experience in keeping himself untainted by issues of corruption and who turned the country’s most violent city into the 4th Safest City in the World to live in.

Today, the hard work to achieve national unity and genuine success against corruption and criminality in the country begins.