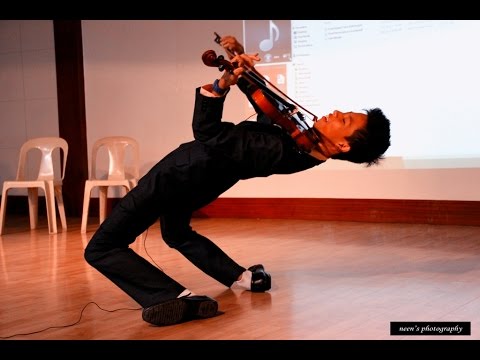 What if Classical Music and Aerobic moves combines? Well, the Dancing Violinist done it all.

I attended an ASEAN Community Forum in our local city last March 6, 2015. The ASEAN forum was held in the University of Mindanao, Davao City.

During the ASEAN Community Forum, John Wesley Valdez, a local young violinist was invited to perform. And he did an amazing performance which awed everyone.

The young violinist bended his knees while playing some music. He’s like the “young male version” of Lindsey Stirling.

People were awestruck when John Wesley bended his knees on the second song, making the audience yell in surprise and amusement.

In fact, I was one of the people fangirling over his performance. I have watched John Wesley perform that stunt several times before. And yet every time I see him do it again, it always feels like I’m seeing it for the first time (No bias, just my honest feeling).

He didn’t only bend his knees, but he ran, and moved around. He did some aerobic stunts which normal musicians couldn’t do while performing.

Audiences were shouting in amusement for every stunt he did. Everyone inside the room was mesmerized. It was really something new to us, especially here in Davao City. Violinists are very rare in our country, a young lad to add.

After John Wesley’s performance, the organizer of the said forum, Mr. Carlos Vargas CEO of BIMP Today International News, applauded for his talent, and same thing with the audiences.

Mr. Carlos Vargas acknowledged his talent by informing all participants that John Wesley had only practiced his piece for just one day!  (Yes, you read that right).

John Wesley had only one day to arrange and practice all ten songs from different countries! In fact, he even edited the flow of his performance before the real event started–a last minute edit!

In the afternoon, during his “encore time” wherein the audience invited him to play another song again, the young dancing violinist unexpectedly fell on his knees–head first. And he fell in front of almost 200 delegates of different schools!

We all thought he wouldn’t finish his number anymore, because his violin got out of tune. But after fixing the tune of his violin (still in front of the delegates), the young dancing violinist grabbed the mic from the MC and said, with a big smile on his young face,

“It’s okay if I fell. People fell sometimes. I’m just a human, not perfect. What’s more important is that you don’t give up.”

After his little speech, John Wesley continued his number. Everyone in the AV room clapped their hands.

“I fell down while playing the violin FOR THE FIRST TIME!!! HAHAHA LOL. I learned a lesson, in falling down no matter how hard it is (like I did in my playing, I fell so hard that the violin became out of tune.) I fell down hard on my face. But still I rise up and reached for the mic and told everyone in the AV Room:

“We all fall down sometimes, like I did. Because I’m a human, Im not perfect. But I choose to stand and finish my number. Don’t be ashamed if you fall but stand up and don’t give up.”

Oh and the people who witnessed my face falling to the ground was about 200 people xD hilarious and encouraging” — John Wesley Valdez, the dancing violinist.

Even though he fell during his second performance, the audience was even more amazed because of his positive respond.

One of the girls said, “What’s amazing about him is that he still stood up and finished his number.” After he fell, he continued to perform his number.

John Wesley Valdez is a rare talent. What amazes the audience more is that he doesn’t read musical notes, he only uses his “hearing” skill. He doesn’t go to music school but he is really passionate about music and his violin.

My event organizer friend, Eunice, says that the young Dancing Violinist is someone every Dabawenyos should look forward for. She says that John Wesley has a “God-given gift.” As a matter of fact, John Wesley has been invited to perform on the upcoming Davao Wattpad Meetup this coming May.

Watching the young dancing violinist performing is a life-changing experience. A breakthrough of the common perceptions of people on people who plays the instrument.

It is life-changing because the dancing violinist doesn’t only performs for the entertainment of everyone but also inspire people on building their foundation and accepting the reality that there’s no perfect in this world.

Everyone who witnessed the performance is looking forward for more from the “dancing violinist!”