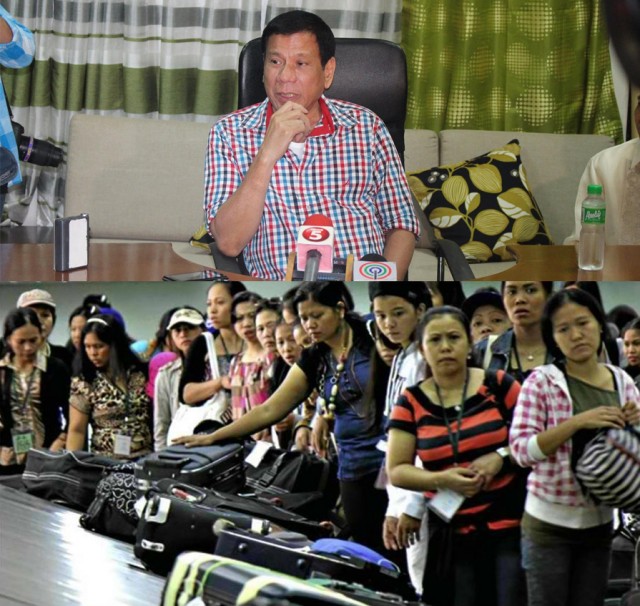 Angered by what he called as a “callous and insensitive” act by the Bureau of Customs to pry into the boxes of goodies and presents sent by overseas workers to their families, Davao City Mayor Rody Duterte has asked government to stop treating the overseas foreign workers like milking cows.

“Those Balikbayan Boxes are sacred. They are an expression of love and affection. Nobody should be allowed to make a mockery of this sentimental bond between a foreign worker and his family back home,” Duterte said.

Duterte said every box of goodies that a foreign worker sends to his wife and children is a result of months of savings.

(Do people in the Bureau of Customs know that even the way the goodies are arranged has an emotional meaning?)

Duterte said the tariff-free Balikbayan boxes is a tradition started during the time of former President Marcos, a tradition which has been respected by all other Presidents.

“Indeed, this privilege is subject to abuse by people who use it to smuggle in dutiable items but there are other ways to address this problem,” Duterte said.

“Commissioner (Alberto) Lina, who owns a forwarding company, knows pretty well that the safeguards could be implemented by the forwarding companies from the points of shipment,” Duterte said.

(Lina, who was recently appointed by President Aquino as Customs Commissioner, owns forwarding company Air21 but he claims that he has sold his interests in the company.)

Even the explanation by Lina that guns could be smuggled in through the Balikbayan boxes does not hold water because security authorities in the US are more stringent in their examination of these shipments, Duterte said.

Duterte said while he understands the mandate of the Bureau of Customs in addressing smuggling, BOC officials should have been more sensitive in handling the issue of the Balikbayan boxes.

“The OFWs should not be made to suffer for the incompetence of people at the Bureau of Customs,” he said.

“Let’s put an end to the exploitation of these people who have sacrificed a lot working away from their families just to secure a better future for their children,” the Davao City Mayor said.

Duterte said he does not understand why the Customs Bureau should focus on the tiny boxes shipped by the OFWs when there are bigger smuggling activities being undertaken by organised groups.

Duterte said he is bothered by the Bureau of Customs move to open the Balikbayan Boxes because Davao City has its own share of the more than 3 million Filipinos working away from their homes.

Duterte also scored the exploitation of the foreign workers by government.

“They are asked to pay so many fees just to work abroad and they are required to get licenses and permits,” he said.

While abroad, they work long hours, they are exploited and in some instances the women workers are abused, Duterte said.

“And when they come home, they are being shortchanged at the airports and robbed by taxi drivers and even “kotong” cops,” Duterte lamented.

Duterte said that if he has his way, children of foreign workers should even be guaranteed free college education.

“The children of foreign workers end up as the biggest losers in the migration of Filipino workers abroad because they are left wanting for the embrace and the love of their parents,” the Davao City Mayor said.

He said the government which has failed to provide job opportunities in the countryside should take most of the responsibility of this modern-day diaspora of millions of young Filipinos.