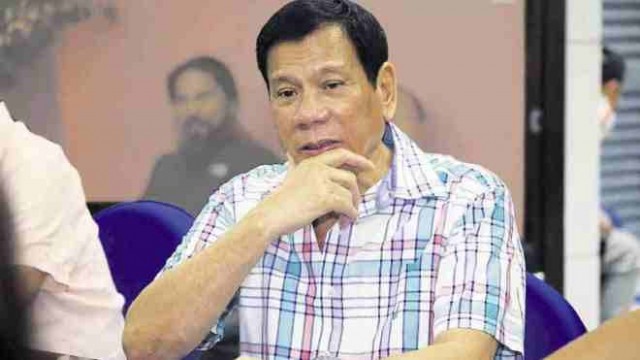 In the country where the criminals operate with seeming impunity, Congress is considered a pit of crocodiles and government is dysfunctional, Davao City Mayor Rody Duterte said he will focus on three objectives when he becomes President: Stop Crime, Stop Corruption and Fix Government.

In a round-table face-off with editors of the Philippine Daily Inquirer Tuesday night, Duterte, who is now ranked No. 2 in the survey for preferred Presidential prospects for the 2016 national elections, said the flagship program in his mission to fix government is the shift from the highly-centralised Unitary Presidential System to Federal Parliamentary.

“Take it or leave it,” Duterte said of his proposal adding that he would only be convinced to run for President if the Filipino people would give him the power to institute reforms in society and in government.

“Tell me what to do—drugs, flooding and children being raped. The justice system is working badly,” he asked the Inquirer editors.

Duterte said there are three urgent actions he would do as President: “stop criminality, stop corruption and fix the government.”

The 70-year-old Mayor who is credited for turning a City which used to be known as the “Killing Fields” of Communist assassins in the 1980s to become of the World’s Safest Cities, said the first step in fixing government is to call for a Constitutional Convention to change the form of government from Unitary Presidential to Federal Parliamentary.

A Federal Parliamentary form of government which is advocated by former Senator Aquilino Pimentel Sr., Reuben Canoy, Lito Osmeña and lately former Chief Justice Reynato Puno will usher in the creation of Federal States which are highly autonomous with the Central Government only holding on to powers in national defence, foreign affairs and the currency.

Duterte said a Federal Parliamentary form of government would ensure an equitable political representation and generate economic and job opportunities in the countryside as the States would be empowered to run their own affairs.

He said the proposed Bangsamoro Basic Law has legal infirmities which could derail its passage in both the Lower and Upper House of Congress.

“Without the BBL, what is your next card? I have looked into the BBL and it has a lot of inconsistencies,” Duterte told the Inquirer staff.

“The Muslims of the mainland of Mindanao should have a separate Federal State and there should be another Federal State for those in the islands,” Duterte said in earlier statements.

“If you don’t want that (Federalism), okey, look for another son of a bitch,” Duterte told editors and reporters of the Inquirer.

Earlier, Duterte said in a statement that should he become President, he would privatise the graft-ridden Bureau of Customs and Bureau of Internal Revenue, including the inefficient Government Service Insurance System (GSIS).

Duterte has also been calling for the re-imposition of the death penalty for drug dealers and plunderers of government funds.

Duterte in a report by Inquirer’s Niña P. Calleja said that “the five pillars of the Philippines’ justice system—law enforcement, prosecution, judiciary, correctional institutions and the community—are dysfunctional.”

The Inquirer report also quoted Duterte as saying that “because the correctional institutions have failed to do their jobs to rehabilitate convicts, criminality is constantly on the rise.”

Duterte cited as an example the scandal in the National Prison in Muntinlupa where convicted drug dealers continued to ply their trade, even manufacturing drugs right inside the national penitentiary compound.

He has earlier proposed the transfer of the Muntilupa National Penitentiary to an isolated island similar to the decommissioned Alcatraz Island prison in the US.

For plunderers in government, Duterte said they should be sentenced to die so that nobody else would attempt to steal people’s money.

He, however, earlier proposed the institutionalisation of subjects on moral values in the country’s elementary and secondary schools “to mould a culture of honesty and decency among the Filipinos of the next generation.”

Duterte, who has long been at odds with Justice Secretary Leila de Lima and Human Rights chief Etta Rosales over the latter’s charges that the Mayor is behind the vigilante group Davao Death Squad, said if the Filipino people would like him to be President, he should be give enough elbow room to implement the changes which he envisions for the country.

“I have to stop criminality and corruption. I have to fix this government. I won’t do it if you want to place me there with the solemn pledge to stick to the rules,” he told the Inquirer editors and reporters in a meeting which started late Tuesday night and ended at about 12:30 a.m. of the following day.