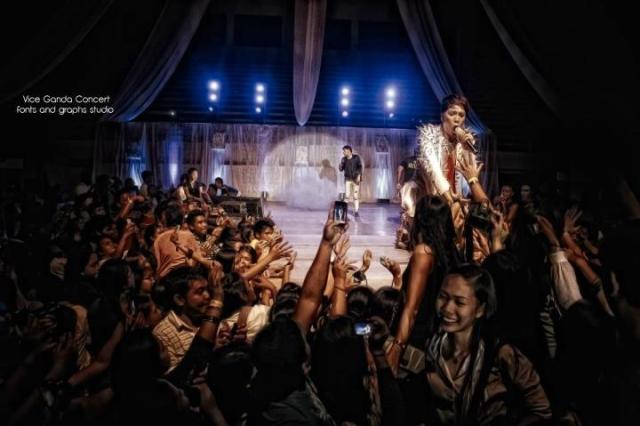 Audiences across South Central Mindanao have given a resounding thumbs’ up to the recent Vice Ganda in Fashion Concert at the University of Southeastern Philippines Cultural Center and Sports Dome.

The center buzzled in anticipation just before the Vice Ganda Fashion concert was about to start. A large throng of people came out to see the show, stirred by constant promotion of Vice Ganda in Showtime, billboard, posters, social media sites and blogs making waves all over the metro and neighboring cities.

Most charming among the performances were Tweety Lagmay’s mesmerizing own version of “Buttercup” and Kervy Salazar impressive dubstep performance.

The audience response was enthusiastic though Vice ganda appeared very late. Vice Ganda apologized for the delay of her show. Her costume was left in Manila and was sent through air cargo which, was also delayed due to flight delays resulted by bad weather.

A full house enjoyed the witty remarks and punchlines of an all out performance from the unkabogable Vice Ganda.

Organized by JSB Waves-Talent Corp, the concert aimed to promote Davao’s entertainment industry. Congrats JSB headed by Gerick Samuel Campana and Fred Diones. Thank you for continually enlivening the lives of the hardworking Dabawenyos who definitely need this kind of entertainment from time to time!

Feedback received from the audiences includes:

It was really a good laugh for me and others. Vice Ganda’s talents stunningly wipe away problems and worries for a while.
–Byaheng Dabawenya

Vice Ganda showed up! everyone was screaming at the top of their lungs, even me, i even lost my voice. lmao. the whole time vice was on stage, laughter was everywhere. Everything was worth it, kahit ang mahal ng ticket, I paid 1K! But yeah, I idolized vice ganda! Hands down to his humor!
– The Skinny Fat Pig

Vice Ganda made us laugh for 3 hours! Although there were a lot of green jokes that were so awkward to hear/watch (Mom was beside me) it was helluva fun!
–Entice Me