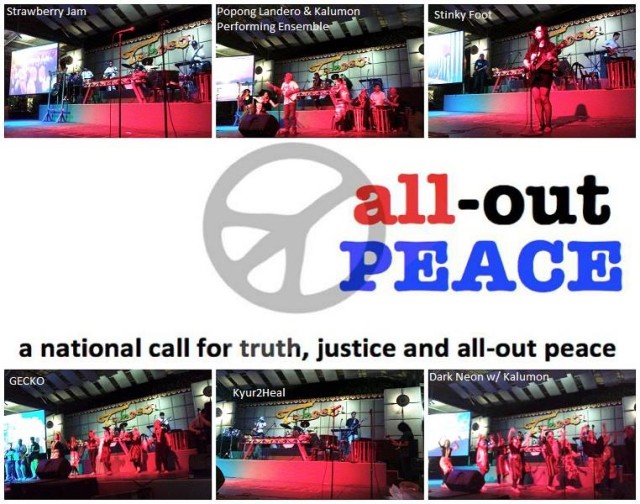 Gathered with one purpose, Peace advocates in 13 cities celebrated the National Day of Healing last March 6, 2015.

Davao City conveners  filled the day with lots of activities that promotes unity and peace.

The day started at 4:30 am. A Fajr (Islamic Morning Prayer) was held in Almendras Gym. Different activities were then held and were actively participated by peace advocates in the city. Activities such as “Lakaw Kalinaw” (Peace Walk), “Wheels for Peace” that was participated by lots of bikers in town, and “Musikalinaw” that commenced the day-long celebration.

Musikalinaw, held at Matina Town Square, is an event that expressed peace and unity through music; to offer every beat to every breath of the Fallen.

The event was planned only with a span of 12 days yet, you can’t see that this was just prepared for a short period of time because of the amazing flow of the program and tremendous performances by the guests.

The Musikalinaw opened with the burning passion of the Kaagan Dance Company and Ateneo de Davao University who performed ethnic dances with their colorful and festive costumes that you can’t even let yourself miss a single moment of their performance. Also, the group of Kalumon Performing Ensemble offered a song with an interpretative dance that expressed much emotion and touched the heart of the audience.

Some local bands were invited; Strawberry Jam, Kyur2Heal, Smile Band, Stinky Foot, GECKO Band and Dark Neon Band (a band composed of teen musicians) to perform. These bands offered and presented a song about peace, love and unity. Some of them played their own song compositions about peace and even if they’re in different music genres, they shared the same passion to show their support to the cause of the gathering.

Also Popong Landero, one of the most influential musicians in the city, also offered a song titled “Himig ng Pag-ibig” that made the the crowd sing along. Popong, together with the Kalumon Performing Ensemble, performed a presentation depicting the jolliness and the sharing of smiles with each other that made the crowd enjoy the music.

To give honor to the Fallen and to the civilians who died in the encounter in Maguindanao, the 68 beating of the gong pays tribute in which each name who died in the incident is a beat of Gong.

The campaigns were organized by some government organizations and non-government entities to awaken the true spirit of the Filipinos for peace and unity.