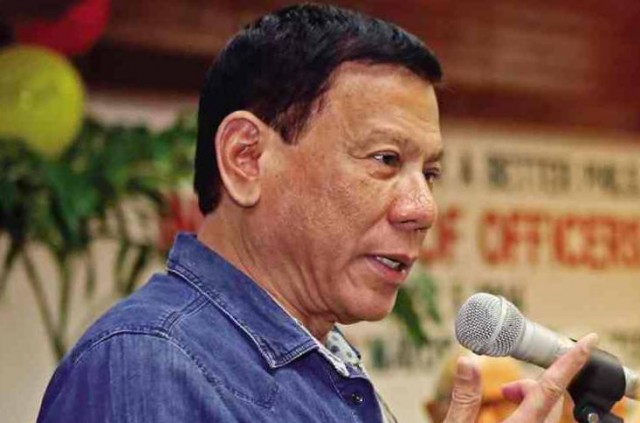 Presidential prospect and Davao City Mayor Rody Duterte today said he is yielding to the appeal of friends and supporters to keep an open mind about the Presidency and stop issuing categorical statements that he will not run for the country’s highest political post.

In his weekly program “Gikan sa Masa, Para sa Masa” aired Sunday on ABS-CBN Davao, Duterte said he understood the sentiments of his friends and supporters who have been urging him to run for President in the face of the serious problems confronting the country.

“I will consider the suggestion of my friends and supporters,” Duterte said adding that the Presidency is a destiny which only God could bestow on a person.

Friends and supporters of the tough-talking Davao City Mayor renewed their appeal to Duterte to stop declaring that he will not run in the face of his steady climb in the national rankings for Presidential prospects in 2016.

The survey of Pulse Asia showed Duterte at third place behind Senator Grace Poe and Vice President Jejomar Binay with 15%, an increase of 3-percentage point from the March survey of the same polling group.

Even in the controversial SWS survey which used the “pick three” system in ranking Presidential prospects for 2016, Duterte jumped from 15% to 20%.

Duterte’s friends and supporters believe that the ratings of the Davao City Mayor could have been higher had he not categorically stated that he was not interested in the Presidency.

“The reluctance of people to openly express support for Rody is due to the fact that he has repeatedly declared he is not running. In fact, the question we always hear is: “Is he really running?,” said former transportation secretary Pantaleon Alvarez, one of Duterte’s most ardent supporters.

Even political leaders are left hanging in the balance and are in a quandary on how to handle the Duterte factor since he is very strong among the grassroots, especially in Mindanao, the Visayas and in Metro Manila and Southern Tagalog region.

Contrary to surveys showing that Duterte only holds 37% of Mindanao, political leaders in the third biggest island of the country believe that the Davao City Mayor will garner 75% to 80% of the Southern Islands’ votes estimated at about 13 million.

“Any Mindanao political leader who will campaign against Duterte in his area will face a revolt and upheaval from his own people because they see Duterte as their hope of getting the attention of the national government for the first time,’ said outspoken Duterte supporter Gov. Jose Zubiri of Bukidnon.

The prospect of having a President from Mindanao has also forced Southern political leaders to set aside their political differences and forge unlikely alliances just to support Duterte.

Right now, most Mindanao political leaders are adopting a wait and see stance and are awaiting the final decision of Duterte before making their political alliances.

When Duterte decides to run for President, all the other Presidential prospects may just have to skip Mindanao and save their resources for other areas because the Southern Islands are expected to go all-out for the Davao City Mayor.

Duterte’s numbers are expected to rise with his pronouncement today that he will keep his options open.

“Duterte is a unique breed. He is a politician who does not beg for votes or political support. He believes that it should be the people who should ask their leaders to step up to the plate and lead them,’ said Maribojoc Mayor Jun Evasco, a long-time political adviser of the Davao mayor.

This is the reason why Duterte has been reluctant in issuing statements that he is considering the Presidency, he said.

“He wants the call by the people for him to lead to be clear and overwhelming because he does not to beg for votes or financial contributions,” the Bohol Mayor added.

Among all the Presidential prospects, it is only Duterte who carries clear messages on the problems of drugs, criminality, corruption, the Communist insurgency, the West Philippine Sea issue, the Sabah issue and the Moro problem in the South.

“Besides, Filipinos now would like to experience how it is to live in a safe and secure country, just like the City of Davao which is now one of the 10 safest cities in the World,” said Zubiri.