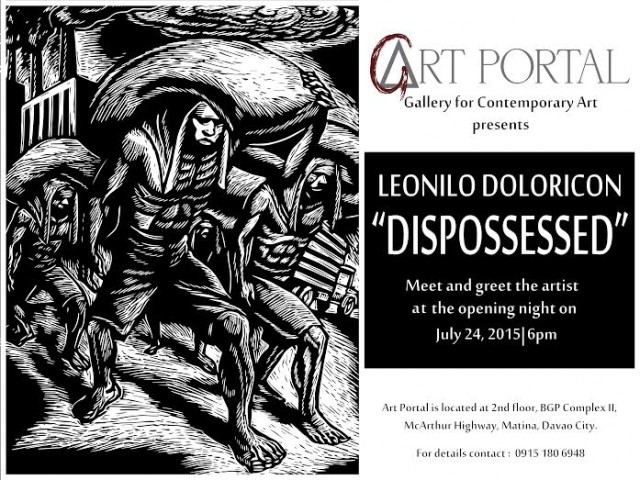 The works are mostly limited edition prints that are visually compelling and thought provoking at the same time. 1988, art critic and University of the Philippines Professor Emeritus Alice Guillermo writes how a group of artists chose the working class as the subject of their works. In the 1970s, this was radical and extraordinary: artists whose weapons would only be their ink, brush, and palette knife are joining the struggle against oppression.

Together with Pablo Bean Santos, Orlando Castillo, Papo de Asis, Antipas Delotavo, Edgar Fernandez, Renato Habulan, Al Manrique, and Jose Tence Ruiz, Neil Doloricon articulated his observations about society. Its ills and excesses have been the subject of his works. At that time, these group of politically aware artists became hailed as the Social Realists.

Artists who identify themselves with social realism approach art-making as social interventions. Instead of being passive observers of the world around them, they take on the role of critics who offer their take on social inequalities that they see. At a time when voices of freedom were silenced, artists created visual instances of protest. This practice continued to the present. Social realists like Neil Doloricon continue to produce works that are charged with social commentary. Social realism will always be current: it is an unending process of questioning, for the dynamics of oppression have been reconfigured in a seemingly free and liberal society. Thus, when confronted by the art work, one cannot help but observe the weary lines of sufferance imprinted on paper or canvas, as seen in the hungry faces of those whom the art movement seeks to serve.

Social realists are also known to be very active in cultural work. They often take on the role not only of artists but facilitators and cultural advocates who seek to introduce ripples of change in a given community.

The range of themes includes tenants and the absence of land tenure, construction workers toiling away vis a vis contractual labor, workers in picket lines, and
militarization in rural areas. Other themes include ancestral domains and how external forces encroach upon them. Workers conscripted in the global economy are also presented as a biting social critique on ideas of progress and modernity. The overworked laborer whose meager wages are barely enough for sustenance have become part of Doloricon’s body of works. The idea of toil is made more complex when at the heart of it is the erasure of human dignity. Sufferance is even made more legible when the subject involves displaced families. These recurring images throughout Doloricon’s prolific career shall be seen in his solo exhibition, Dispossessed.

Leonilo Doloricon is the first guest artist of Art Portal, Davao. It is a new art space that will bring leading contemporary artists who wish to share their talents and at the same time immerse in the place.

The exhibition opens on July 24. The public is invited to meet the artist. Art Portal is located at the 2nd floor of BGP Complex II, McArthur Highway, Matina Davao City. For details, contact 0915-1806948. Dispossessed runs until August 14, 2015.