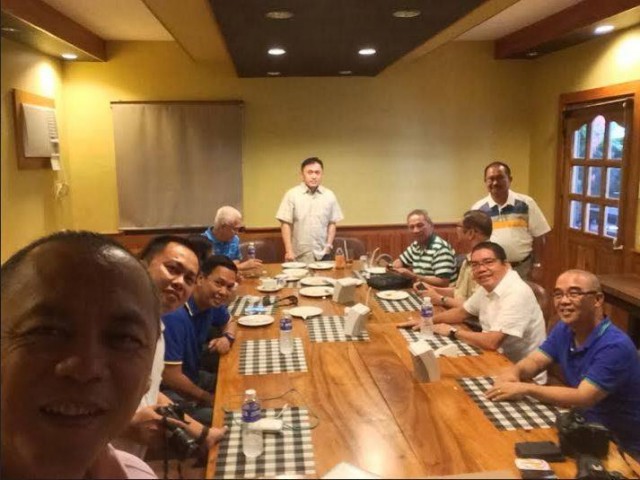 In the national executive council meeting of the group Friends of Rody Duterte (FoRD) Nov. 5, I told participants that there is a new virus which has infected millions of Filipinos, including myself.

It is worse than the Mad Cow disease which attacks the brain of the beast because this new virus attacks both the heart and the brain.

It is called the Duterte Virus and its symptoms include old men and young and beautiful women shaving their heads bald, musicians unable to stop the urge to compose songs, Overseas Filipino Workers crying and travelling for hours to register as voters, young men and women having themselves tattoed, young people refusing to register to be able to vote and otherwise respected and brilliant minds acting foolishly by continuing to hope that the man who has said “No” several times to the Presidency would ultimately yield and say “Yes.”

That would be the apt description of those infected by the Duterte virus, including myself.

The persistence and insistence of the infected people are such that there are those who suspect that we have ulterior and selfish motives in pushing for a Duterte Presidency.

One follower of this page posted this question addressed to me: “Ano ang meron para sayo?”

What’s in it for you? It was a question loaded with contempt.

Although I felt offended, I believe that question should be addressed to all Filipinos of this generation.

What’s in the Duterte Presidency for us, Filipinos?

To answer that, we first have to ask who do we have as serious Presidential contenders now?

Senator Grace Poe is leading the pack, according to the polling firms but aside from the grim prospect of being declared as unqualified for the Presidency because of citizenship and residency issues, I do not believe she has anything substantial to offer to me and the 100 million Filipinos.

I listened to some of her speeches and interviews. Pardon me for being brutally frank but I made the conclusion that there is really nothing much in-between her two ears to produce ideas of her own on how to alleviate the sufferings of the Filipinos.

I shudder at the thought of a President depending solely on the advices of people around her. That would be disastrous for the country.

Two years ago, a top leader of the Liberal Party (LP) visited Kidapawan City and we talked about the possible presidential candidate of the administration party.

When he said that it would be Roxas, I told him that unless the administration buys votes and cheats in the coming elections, Mar could never become President.

The problem with Mar Roxas is Mar Roxas himself. He may not be tainted with major corruption issues but he has this despicable habit of treating people around him like garbage.

Recently, a police general shared with me the reason why most members of the national police force would not support Roxas.

With all of the issues of corruption raised against him, is there still a need for me to explain why Binay should not be President?

Manang Miriam is my mother’s relative. In fact, I have cousins in M’lang who carry the Defensor family name.

Beyond filial loyalties and relations, however, the question being posed is: Is Manang Miriam really serious in running for President?

There has really been no movement to organise nation-wide after she filed her certificate of candidacy for the Presidency.

She is brilliant but she could not win the Presidency with those stunning one-liners.

So, if the elections were an exercise of “Select the best answer,” mine would be “None of the above.”

As a self-confessed carrier of the Duterte virus, I can share with you the other symptoms of those infected by it.

Duterte virus carriers have a deep-seated concern for the future of their children and their grandchildren, they hate drugs and crime, they dislike corrupt officials, they have preference for a President who thinks of how he could provide jobs and income opportunities for his people, and they go head over heels for a leader who instills fear among the evil-doers and discipline among the population.

So, to those who are irritated that until today, I and millions of others are still holding on to that last thread of hope that Duterte would file his COC on or before Dec. 10, please give us your kind understanding.

We are infected with the Duterte Virus.

You could get a voluntary infection if you want to.

There’s no need to worry. It’s not debilitating. In fact, it is exhilarating.

It allows you to dream of a better future for the Philippines and for the Filipinos.